December 16th 2012 â€“ the tragic day when Nirbhaya was raped. It was not the first rape, but it was the first time we saw our city, our country, come together to protest against this evil in a collective manner. For the first time, women felt that change was afoot and this country was finally going to be safer for them. We thought things would change, but just like most things in India, soon after the incident it all died down.

Every 30 minutes a girl is raped in our country, this is not something we can continue to ignore. We decided that waiting for someone to stand up and do something was pointless. Why not try to be that someone! We decided something ourselves, so we started the initiative â€˜Sheâ€™s Against Rapeâ€™ to bring people and resources together to fight violence against women in our city and eventually our country. We have decided to take the first of many steps and hope that more and more people will join us in making Delhi and India safer for all women.

Our current projects:
â€¢ Raising voices against rape: A part of our awareness campaign, this project is designed to help people speak out and provide a platform for them to voice their opinion about rape. It could be anything from a quote to a poem to a message. Anyone who has anything to say can send it in to us, along with their photograph, and we post it on our facebook page/twitter/blog. We are also working on a video documentary on the issue of â€˜rapeâ€™.

â€¢ Project Rape Whistle: This is our main agenda as of now. A rape whistle is a small, electronic, as well as manually operated handheld device that emits a sound of over 120 dB when activated. It is simple and extremely easy to use. We intend for a woman to use it as a call for help whenever she feels threatened. Click here for more details on Rape Whistle.

We have two more projects that are still in the development phase and will be starting very soon! 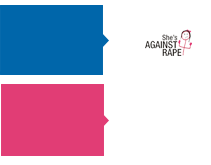